Provides a constant stream of money

A Tiberium Spike is a towering structure dominating the landscape. Its main purpose is extraction of Tiberium from underground deposits, providing a small, but continuous stream of resources, as it also processes the mined Tiberium on-site. If one of these structures is destroyed, a small Tiberium field appears near the wreckage of the spike, the result of Tiberium within the spike spreading all over the area nearby. Their operational energy requirement is supplied by a highly efficient solar panel that cover the structure (self sufficient). They are connected by a series of network of international recognized civillian based Tiberium comodity trading.

The gameplay function of Tiberium spikes is identical to that of Tech Oil Derricks in Red Alert 2 and Generals. One difference though, is that the credits provided by Tiberium spikes require storage space within a player's Refineries or Tiberium silos. Without enough storage space, the spike will not generate credits for its owner.

GDI personnel usually refund the owners of the Spikes that are commandeered or destroyed with vouchers that can be exchanged for credits in Reykjavik, a GDI base and Blue Zone. This effectively makes owners from certain countries and Yellow zones unable to redeem such compensation.

As of Tiberium Wars versions 1.02 and newer, spikes provide 750 credits upon capture and continuous income in 25 credit increments.

In Kane's Wrath version 1.02, spikes provide only 500 credits on capture and 10 credit increments. 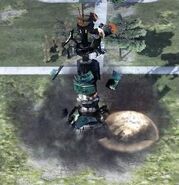 Retrieved from "https://cnc.fandom.com/wiki/Tiberium_spike?oldid=216930"
Community content is available under CC-BY-SA unless otherwise noted.