The Titan[1] battle walker was a unit that was supposed to appear in the cancelled Tiberium.

This massive bipedal walker features a rotating upper body, allowing it to engage enemies in 360 degrees around it with its twin cannons. Unlike its predecessors, it's controlled by a fully autonomous AI, which is still in prototype stages in 2058[2]. 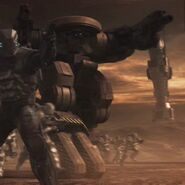 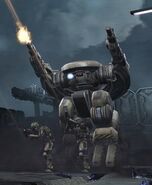 Concept art by Eric Hilleary
Add an image to this gallery

The Titan was to appear in Tiberium.

Retrieved from "https://cnc.fandom.com/wiki/Titan_(Tiberium)?oldid=209652"
Community content is available under CC-BY-SA unless otherwise noted.