Can shoot over buildings

The Titan Mk. II was a GDI main battle walker that entered service following the Second Tiberium War. It first saw limited deployment with the Steel Talons before being redesigned and adopted by the Offense branch before the Fourth Tiberium War.

The Titan Mark II is the result of an advanced research and development initiative put forth by the Steel Talons - calling for state-of-the-art robotic technology, diamond-hard battle armour and legs able to traverse any hard terrain easier than its tracked counterparts.

The result was a formidable battle walker which saw years of service with the Steel Talons: armed with a high-powered 120mm cannon capable of reducing enemy armor to scrap, outfitted with highly resilient angular composite armor—which can be strengthened further with Adaptive armor technology, and powerful legs capable of much better mobility than its predecessor - even able to crush contemporary armor underfoot. The Titan Mk. II was indeed fearsome—more than a match for coequal vehicles of its generation.

Despite these advancements, the Titan still suffered from a relative lack of speed—the high costs in contrast to how marginally it improved in conventional combat to its more traditional parallel: the Predator tank, were simply deemed unjustified. The former was thus replaced by the latter as GDI's premier mobile armor—and hundreds of Titans were mothballed, sitting in GDI armory warehouses - diminishing into disrepair. Some were even converted into heavy industrial equipment: outfitted with shovels or cranes to aid in the construction of the Blue Zones.[1]

However, it seems a small number of these walkers were permitted to remain in service with some branches of GDI, as several were seen guarding the Tacitus at the Rocky Mountains Complex.[2]

Even though the Titan Mk. II was retired, its legacy lived on in the form of the Juggernaut Mk. III artillery walker - the only GDI mechanized walker still in service by 2047–which was based on a Titan Mk. II chassis.[3]

For years, veterans of the Steel Talons petitioned to bring the reserves of the Titan back into service, but to no avail. However, by the time of the Incursion War, the Nod Separatists' use of heavily armored Crawlers necessitated the deployment of high-energy heavy weapons platforms capable of cutting through the strongest of armor. Since their robust internal frames were well-suited to carrying heavy lasers - the Mk. II Titans were pulled out of storage and retrofitted with an array of armor and mobility upgrades—once more bringing it up to par with the new decade. At last, the Titan was back in action.[1]

The Titan replaces the MBT-6 Predator tank in the Steel Talons, and is exclusive to this sub-faction only. It improves on the Predator with its thicker armor, a more powerful main gun, its great stature: which allows it to shoot over structures and natural obstructions, and its capability to crush other vehicles underfoot. But this is all offset with a slower movement speed, the inability to reverse-move, and a higher unit cost. As with all large walker units, the Titan can be instantly destroyed by Commandos, but unlike the Juggernaut, the Scrin Annihilator tripod and the Nod Avatar Warmech, the Titan will not leave a husk after its destruction.

A disadvantage unique to the Titan is that when it sustains over 50% damage: it will start to limp, slightly impairing its mobility. When over 75% damage is sustained, it will limp badly, severely impeding its movement. This makes the Titan the only unit in the game to have three "states of damage". (Most vehicles appear the same until lower than 25% hp)

An early game tactic available to Steel Talons commanders consists of constructing a Titan as soon as possible, marching it into an opponent's Tiberium field and crushing enemy harvesters by walking over them: easily halting the opponent's economy (only works on GDI and Nod; Scrin Harvesters are uncrushable). The tactic can be countered in the traditional manner - by moving the harvesters away and responding with anti-vehicle units such as masses of rocket infantry.

Another customary tactic employable by Steel Talons commanders is the pairing of Titans with Mobile Repair Transports holding rocket or rifle troops. The transport will keep the Titan from limping and keep it alive longer, while the garrisoned troops can either provide extra anti-air and anti-armor, or anti-infantry capability - helping to cover for the Titan's weaknesses. 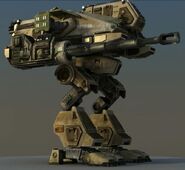 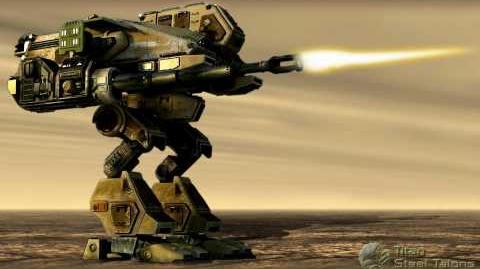 Retrieved from "https://cnc.fandom.com/wiki/Titan_Mk._II?oldid=237570"
Community content is available under CC-BY-SA unless otherwise noted.