The transport helicopter is a medium-lift tandem rotor cargo helicopter, used by both the Global Defense Initiative and the Brotherhood of Nod in Renegade.

The helicopter has two rotors and call provide all-weather, day-or-night front-line transport of combat personnel, supplies and equipment. It can carry a fully equipped squad of infantry, and deploy it anywhere on the battlefield with the use of retractable rappelling cables, mounted at the rear exit. They can also carry a single battle-ready vehicle underneath them using cables and deploy it in the field.

For close range defense it has two Condor chainguns mounted on each side to repel potential enemies from the landing site. However, its light armour makes it extremely vulnerable to anti-aircraft fire, especially while unloading troops or hovering.

This helicopter replaces the Chinook in Renegade. It appears in singleplayer often, delivering reinforcements for Nod and sometimes airdropping supplies for Havoc.

On "flying" maps in Renegade multiplayer, it also appears as a flying APC of sorts. 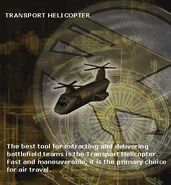 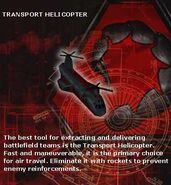 A Nod medical evacuation helicopter
Add an image to this gallery
Retrieved from "https://cnc.fandom.com/wiki/Transport_helicopter_(Renegade)?oldid=217569"
Community content is available under CC-BY-SA unless otherwise noted.