Tratos united Tiberium-mutated humans under one cause. A charismatic man with limited precognitive powers, he rules the mutants with compassion and skill, giving shelter, society and order to those changed by Tiberium. His personal bodyguard was Umagon, who was loyal to him to the end.

Tratos has exceptional skill as a researcher and possesses great intellect. He was the original owner of the Tacitus, before he was tricked by Kane into handing it over and later imprisoned by Nod in order to aid the translation efforts of the incomplete data matrix. Plagued by the thought that he may have contributed to the doom of humanity, he aged rapidly and his health deteriorated, to the point that he had to be relocated to a Nod prison medical colony.

The player raids that colony with a Forgotten commando unit in cooperation with GDI. They liberate the leader and evacuate him to the Kodiak with help from Lt Stark. Tratos remains on the ship for the remainder of the conflict (due to his state, as he is unable to walk after Nod's treatment), aiding commander Michael McNeil with his knowledge and scientific skill, as well as the visions he regularly experiences. Eventually, he gets back on his feet and is able to perform regular scientific work. He manages to develop a prototypical anti-mutagen he injects into Umagon to stop the divination process. Unfortunately, the serum does not work, and Umagon mutates horribly.

Tratos established a research base together with GDI, where he studied Tiberium and it's mutagenic effects, in cooperation with the Daedalus Team, commanded by Doctor Gabriella Boudreau. His work as well as ability to translate the Tacitus made him a threat to CABAL, who ordered his assassination.

Despite heavy GDI presence in the area as well as Forgotten elite members protecting him, the Black Hand detachment manages to penetrate the defenses and gun him down, right next to an orange Tiberium crystal he was studying at the time. 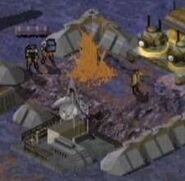 Tratos with Tiberium crystal
Add an image to this gallery

Retrieved from "https://cnc.fandom.com/wiki/Tratos?oldid=228255"
Community content is available under CC-BY-SA unless otherwise noted.