The Troop Crawler is a fairly fast but unarmed APC that is not designed to come into contact with heavy armor. Its ability to detect stealth units makes it useful to have within Chinese bases, to detect enemy infiltration.

Troop Crawlers are designed so that if destroyed the infantry being transported would survive, but with damaged health. It can also quickly heal infantry when they are sent into the Troop Crawler, somewhat like an ambulance.

Troop Crawlers are an essential complement of any Chinese armored column, as their stealth detection capabilities allow them to detect any unwanted surprises - this was especially the case when engaging GLA forces.

Key weaknesses of the Troop Crawler are its relatively light armor and lack of defensive weapons. Another weakness was that the infantry has to dismount to engage opposing forces, exposing them to enemy fire. Interestingly, it is also a target for the Chinook's Combat Drop, as it can wipe out all soldiers inside.

It's also economically decent due to the fact that it costs 1400, as 8 Red Guards cost 1200, technically getting you a decent support and infantry transport vehicle for only 200. 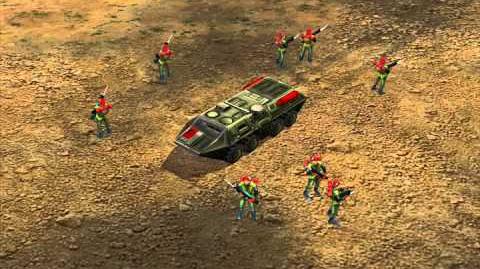 Retrieved from "https://cnc.fandom.com/wiki/Troop_crawler?oldid=230945"
Community content is available under CC-BY-SA unless otherwise noted.