General Tsing Shi Tao is a Chinese Class AAA General serving in the People's Liberation Army during the War against the GLA.

The 50 year old[1] General Tsing gets what he wants, at any cost. Impatient to a fault, General Tsing relies heavily on nuclear technology on the battlefield. Unfortunately, there have been several terrible accidents. While General Tsing was the responsible officer during the Mudanjiang Disaster of 2007, his considerable talents saved his career. General Tsing believes such trials and errors are part of the development process.[2]

His divisions are beginning to see the results of his convictions, as a prototype of an advanced nuclear power plant has produced better results. Programs to develop tactical nukes and to promote stability in radioactive isotopes are producing better safety records, which will be well-received by his troops.[3]

His knowledge of nuclear weapons makes him a dangerous enemy, as all of his main battle tanks are much faster and are equipped with nuclear shells. He is capable of annihilating groups of enemies while usually launching nuke after nuke at them, not giving them any time to react. He would usually welcome his opponent with a display of his nuclear arsenal, using Nuke Cannons to obliterate the recon force sent ahead and launching a nuclear missile to remove any survivors before a forward base could be built.

The village in front of his main fortress is mostly unsafe for ground roaming, forcing commanders to deploy air cavalry to safely mobilized across the tainted area. However, he displayed a callous disregard for the well-being of his own infantry, sometimes marching them directly through radioactive slag in his haste to thow them at the enemy. His Mig, although nuclear powered, can be nullified by superior enemy aircraft equipped with countermeasures. Although USA have access to the Ambulance and the Chemical Suit upgrade, they are not recommended as both are ground related. GLA, having no ability to deploy air potency, can always turn to stealth tactics. GLA defence is somewhat more vulnerable as most of their defence structure features exposed infantry, a network of demo charges is a suitable solution. Fellow Chinese generals may use units capable of being upgraded with Speaker Towers. 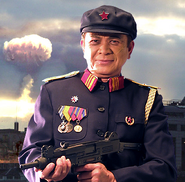 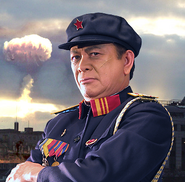 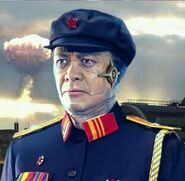 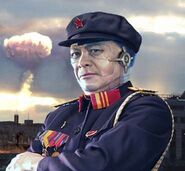 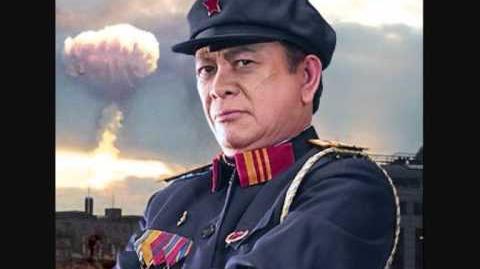 Retrieved from "https://cnc.fandom.com/wiki/Tsing_Shi_Tao?oldid=231246"
Community content is available under CC-BY-SA unless otherwise noted.