The Tsunami Tank is the MBT of the Empire of the Rising Sun. Although light and small, it is far more technologically advanced than both the Soviet and Allied standard tanks, and is also amphibious. It's armed with a cannon that fires some kind of blue darts, which can be seen if one looks closely. The Tsunami tank also has the Kagami Armour that, when triggered, activates an invisible army of nano machines which sacrifice themselves to repel the next attack against the Tsunami, compensating for its light armor somewhat.

The Tsunami Tank is a very typical Imperial unit: extremely versatile, fast and agile but lightly armored. The high rate of fire of the cannon makes up for the light damage it does, but its fragile armor makes it unsuited for direct engagement.

When the Soviet Army first faced the armored divisions of the Empire of the Rising Sun, rumors quickly spread of strange, gleaming, amphibious tanks that were invulnerable to enemy fire. Some even believed that this invulnerability came from the Rising Sun-emblazoned banners mounted on the rear tread assemblies, and there were stories of brave but misguided conscripts managing to actually get within arm's length of the banners before being ruthlessly slaughtered.

As the war raged on, it became clear that Tsunami Tanks were protected not by any supernatural powers but rather by an innovative new armor system. The highly trained Tsunami crews are adept at using this shield technology in both offensive and defensive encounters. By diverting nano machines from operation of the main gun, the Tsunami is capable of producing an impact shield that manifests as a cloud of nano machines surrounding the hull of the unit. When even a moderate-intensity energy field is applied to the nano-relays, an energy web forms, which can effectively lessen the impact of ballistics on the hull of the Tsunami. The downside, of course, is that the field takes both power and nano machine resources required to operate the main cannon, rendering the tank unable to fire while the field was activated. In addition, the powerful energy field degrades the nano-relays over time, limiting the protection to short bursts to avoid complete collapse of the nano machine system.

While not invulnerable as once thought, the Tsunami is still a potent weapon. More than just a typical amphibious vehicle, which stay waterborne only long enough to get to dry land, Tsunamis are as capable on water as they are on land, often escorting ships and assaulting naval targets. The extent to which the Imperial military views them as naval vehicles is aptly demonstrated by the lines of Tsunami tanks often seen emerging from the Imperial Naval Yards and deploying directly into naval combat. Like their namesake, they are also able to wash ashore and leave a trail of destruction far inland.

All of this technology and versatility comes at a price. The Tsunami is the lightest main battle tank in any inventory and has difficulty standing against Guardian or Hammer Tanks in a toe-to-toe fight. This fact, and the complexity of the Tsunami's other features, make it a difficult weapon to master - to meet its demands crews go through a rigorous training regimen modeled on traditional Japanese warrior training. Putative tank pilots spend long hours in isolated training facilities studying tactics and weapon systems. In direct contrast to most Soviet and Allied training doctrines, Tsunami crews also study philosophy, poetry, and traditional calligraphy, dedicating themselves to an almost monastic life of warfare and scholarship.

The arduous, continuous training and isolationist culture of the Tsunami crews builds a strong esprit de corps among crews and members of this elite force seldom leave of their own choosing. There are even unconfirmed reports of Tsunami crew members committing seppuku rather than being transferred to another branch of the Imperial military. Whether these reports are true is unknown. What is known is that the Tsunami tanks and their crews form the very backbone of the Imperial war machine.

Tsunami Tanks are at a disadvantage when going head to head against the other main battle tanks, due to their light armor. However, a typical way to circumvent this is to have several of them activate their special armor and draw incoming fire while the others continue firing. The rapid firing rate of the cannon compensates for the relatively low damage done. However, even with the nanodeflectors activated, Tsunami Tanks may still be crushed by the usual Tier 3 units. Tsunami Tanks are particularly vulnerable to anti-tank infantry and aircraft, like the other main battle tanks used in the war. However a good strategy to counter a few of the flaws the Tsunami tank has, is to keep groups of them moving at all times because they do lack armor they make up for it in speed. However, at $1000, they are also the most expensive main battle tank in the game, tying with the Hammer Tank. Their amphibious ability, however, gives them an unparalleled versatility compared to the Guardian and Hammer Tanks. It also makes them good escorts for expanding Nanocores.

Battlefield reconnaissance has revealed at least these facts about the Tsunami Tank:

• Deadly Wave -- The Tsunami Tank is a fully amphibious main battle tank, able to seamlessly transition between land and water combat. It is effective against all land-based and water-based vehicles, giving Imperial commanders tremendous flexibility on the battlefield.

• Protected -- The Kagami Nano-deflective armor can be used offensively to break through enemy lines in order to assault vulnerable targets in the rear or defensively to give the tank extra time to escape from danger. Because the main gun is inactive when the Kagami is active, the tank can even move faster as it is not limited by the main gun target stabilization system.

• Big things come in small packages -- While technically a lighter tank than either the Guardian or Hammer tanks, the Tsunami Tank's durability is increased by the combination of the Kagami armor and its amphibious nature. Crews are careful to avoid direct confrontation with enemy MBTs, instead relying on judicious use of water and the Kagami armor to secure victory.

• Vulnerable to air -- Like all main battle tanks, the Tsunami is vulnerable to attacks from the air, as well as from anti-vehicle infantry. The Kagami armor can help the Tsunami survive until either anti-air support arrives or until the crew has managed to crush the offending infantry.

Upon exiting the Mecha Bay and Imperial Docks

Render in the intro 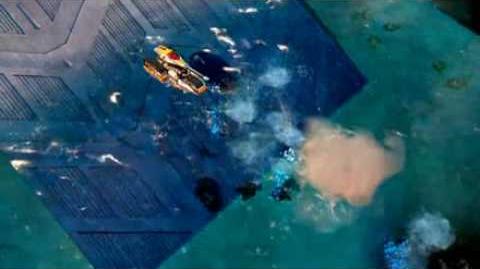 Retrieved from "https://cnc.fandom.com/wiki/Tsunami_tank?oldid=237560"
Community content is available under CC-BY-SA unless otherwise noted.