The turret is a Nod defensive structure made to take out GDI Gunboats and light vehicles.

Destroying a turret in the campaign is easy enough. It doesn't take that many hits before it is blown apart. Turrets fire a rather slow tank shell at enemy vehicles and infantry (though they are more effective on vehicles, since infantry can easily dodge their shots) The easiest way to destroy them is with a heavy tank or a rocket launcher. If those aren't options, then you can simply walk up to one (make sure you dodge their attacks) and plant a C4 on them. Most of the time, in the campaign, they will already be pre-occupied destroying GDI's Offshore Gunboats or other allied vehicles.

In the mission The Plot Erupts, there is an incredibly large version of the turret with a small room inside with sonar and targetting instruments called the Shore Defense Cannon. The cannon is much larger and only attacks the GDI Gunboat assisting you in the assault on the island. It is guarded by two SAM Sites, and has a Flamethrower soldier inside, running the instruments. 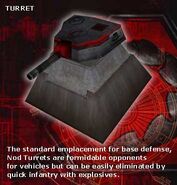 Turret in Renegade database
Add an image to this gallery
Retrieved from "https://cnc.fandom.com/wiki/Turret_(Renegade)?oldid=215506"
Community content is available under CC-BY-SA unless otherwise noted.