The KA-65 Twinblade is a Soviet gunship in Command & Conquer: Red Alert 3.

Designed for a joint role as a heavy gunship and a heavy transport by the famous Krasna Aerospace, this versatile war machine is sturdy and well armed with two PKX 12.7mm heavy machine guns, and four 60mm Oduvanchik rocket pods.

However, its primary function was far more sinister than simple transportation - it was designed to enforce the Union's internationally reviled "zero tolerance" policy towards battlefield deserters, hovering above the battlefield and eliminating troops attempting to flee the front lines (interestingly, according to the Soviet Military Affairs Bureau, the desertions eventually fell to a record 0%, rounding down).

In one incident, an entire Twinblade squadron carrying a Soviet Hammer Tank platoon was ambushed and destroyed by a wing of Allied Apollo Fighters, causing the Soviet Union to fervently re-declare war against France, Germany, and Great Britain in a harshly-worded announcement.

Cherdenko had just finished his briefing with the Commander and Gregor Zelinsky before the commander was sent to Greece. Suddenly, behind the Soviet Premier, a KA-65 Twinblade's shadow appeared outside one of the balcony windows of the Kremlin. The Soviet leader was surprised and fell onto the floor, from his chair and the Twinblade's machine guns started firing through the window.

Cherdenko only suffered a minor head wound, which was bandaged after the Commander returned from Greece. Dasha, the Soviet intelligence officer, asked Premier Cherdenko that if he felt all right, after last night's attempted assassination. Cherdenko presumably had the culprit of the Twinblade arrested and interrogated before unveiling Krukov as the mastermind of the plot, but Krukov turned out to be framed.

The gunship itself is a sturdy, armoured mainline combat helicopter with three rotors (giving it unparalleled stability and lift), swivel-mounted dual PKX machine guns and four 60mm rocket pods mounted on wing pylons. Its design is considered very Russian by field commanders, in the meaning that it's direct and uncompromising (although the amount of ammunition it carries on board and delicate engineering needed to make it fly make it susceptible to anti-aircraft fire). Soviet commissars are co-pilots on each Twinblade in Soviet service. Twinblade is designed for easy refill, either from its fellow airplane or winched up from the ground. They have foldable compartment to haul up to 5 infantry or Terror drones.

The most strategic use is as heavy haulier for Soviet forces. It can haul infantry, tanks, and support vehicles while maintain its speed, providing Soviet with "jumping" element that enable them to deploy leapfrog styled tactic or surprised assault on enemy base from any directions. This capability is somewhat related with its intermesing rotor and dual engine. However, its capability is limited to medium weight vehicle (such as Hammer Tank and the apocalypse tank) and cannot haul extreme weight vehicles such as Assault Destroyer, or MCV.

The helicopter does have weaknesses. While brimming with firepower, all of it is directed to the ground, making it a favorite target of Allied Apollo Fighters. Also, vehicles and structures able to fire back from the ground are threats the Twinblade, due to its weak armor and its machine guns' ineffectiveness against armor. Sufficient numbers of Twinblades can compensate for this weakness. Additionally, when carrying important units, the loss of the Twinblade results in the unit's destruction, as well.

Battlefield reconnaissance has revealed at least these facts about the Twinblade:

• Bristling with weapons -- Twinblades can overwhelm most terrestrial targets ill-equipped to retaliate against aircraft. Their machine guns may fire continuously without overheating, while their rockets deliver a powerful punch. Twinblades have so many rockets, they never have to resupply in battle. However, the rockets are slow to rearm, so Twinblade pilots tend to favor brutal hit-and-run attacks.

• Beware of fighters -- The Twinblade's weapons are squarely aimed at devastating surface threats. As a result, this dangerous helicopter is a favored target for Allied air superiority fighters. The Soviet Military Affairs Bureau strongly recommends that Twinblades always travel with MiG fighter escort.

• Passenger room -- Surveys indicate that, when it comes to vehicular combat transportation, Soviet infantry divisions generally prefer flying in a Twinblade cabin under the strict supervision of a commissar to being packed into a KDB-2 Bullfrog and forcefully ejected into the combat zone.

• Towing cables -- A remarkable power/mass ratio gives the Twinblade the ability to pick up and tow most other combat vehicles, although the towing system and the passenger compartment use mutually-exclusive systems. This means a Twinblade can airlift a vehicle or some troopers, but not both at once. 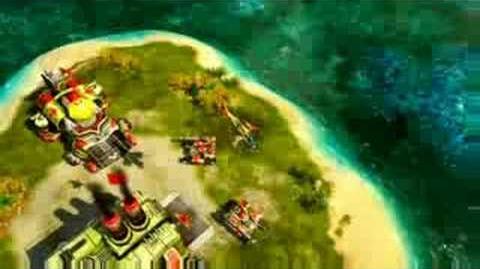 Retrieved from "https://cnc.fandom.com/wiki/Twinblade?oldid=229899"
Community content is available under CC-BY-SA unless otherwise noted.