This is a speculative report I used to work on about the upcoming Command & Conquer (Generals 2). I decided to stop after the story section (because I was getting lazy), but I might continue expanding this.

I've decided to organize myself a guide on all the new feature of the upcoming Command & Conquer (2013) / Generals 2 game. 99% of the credits goes to Alex06, several C&C forum members, and CNCSaga into providing information for the upcoming game. This is currently all under speculation. 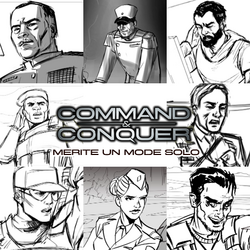 As the original story goes: in the near future, world leaders are mere seconds from signing a global treaty and bringing an end to war as we know it when a devastating terrorist attack rips through the peace conference, killing all in attendance. In a world left with no politicians, diplomats, or activists, only the Generals remain to put an end to global terrorism once and for all as the Global Liberation Army strikes back.As the features go:

The game will be set in the 2030s, ten years after the initial GLA War. During the end of the Chinese campaign in Zero Hour, the United States was weakened, so it began to draw its troops out of Europe in order to build homeland security. China later destroyed the last of the GLA forces and liberated Europe, and thus the People's Republic became the leading superpower. The Europeans praised China for it's actions and began to found an organized called the "Eurasian Unity League", an intergovernmental military and economic organization which replaced the North Atlantic Treaty Organization.

It is unknown what happened between the end of first GLA war to the second GLA war, but perhaps there may have been a major crisis in which it strained international relationships. In the WiP video "Ace in the Hole", EU General Pierre mentioned that there was an organized plan in which it would make the Asian-Pacific Alliance, an East Asian military alliance, to appear as the aggressors. The crisis could involve Europeans and East Asians, in which tensions rose between the two sides that it cause the EUL to split and to cause a near escalation of a possibly Third World War. This part would explain why world leaders would sign a treaty, as it would not only stop the world from going to a large-scale global war for the third time, but it will end war as we know it.

As far as the campaigns go, according to the work in progress videos we may play the campaigns in a "third person perspective", which means in cutscenes we will not be informed by ourselves but the main character will be. A famous C&C example of this is Michael McNeil in the GDI campaign of Tiberian Sun. For the characters, we will see the return of Jarmen Kell and possibly General Tao. If you want to see more info on the characters, check out my past blog post.

Since Generals 2 / Command & Conquer (2013) will be the first RTS utilizing the Frostbite 2 engine. Instead of the classic live-action cutscenes, expect to see CGI (computer-generated imagery) cutscenes with notable features like you're playing Battlefield 3.

We only know four possible events that would happen in the Generals 2 campaign:

To be continued The confirmed factions of G2 are the European Union, the Global Liberation Army, and the Asian-Pacific Alliance. Two very likely factions we could see added in the future are the United States of America and Japan.

Retrieved from "https://cnc.fandom.com/wiki/User_blog:Privatejfx141/Speculative_G2_guide?oldid=164263"
Community content is available under CC-BY-SA unless otherwise noted.