Back to page
View source

"You have a target for me?"

"They look so small from up here"

"Helix on the scene"

Hello Helix Armada, I've put this on some Talk Pages on which you've commented, but I figured that maybe you wouldn't read them. Sooo, I also figured I may as well put it on your Talk Page: please, after commenting on a Talk Page, type ~ ~ ~ ~ (without the spaces between them) to sign your post. You don't have to tell your name in the post itself and it's easier for other contributors to reply to you (here, on your very own Talk Page for example). If you've forgotten to type the tildes, you can always edit them later on.

How to make a Helix Hunter-Killer Team

A good combination of Helixes is:

1 or 2 Helixes- Gatling Cannon(s) for infantry

With this you can decimate an enemy convoy in seconds. Also totally lay waste to Easy Army bases in minutes.

This hunter-killer team is good for China Mission 4 (Zero Hour obviously), the one where you have to stop the GLA from retreating to the north.

Congratulations! You have proven to be a valuable EVA-Intelligence editor. 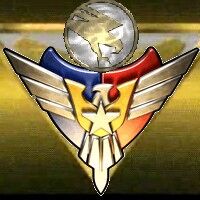 You have proven to be a valuable EVA-Intelligence editor.

The USA, GDI and Allied forces have recognize this and reward you with this Medal.

Also thanks for not adding fanon to the wikis.

We now have a new Quotes Template to fix up the old Quotes and turn them into the new ones.

Here is an example:

"Next time I drive Tank Okay?"

Come on you could do more edits than that. We need absolutely every user in the Community including Random IP Addresses to fix up the wiki.(Saffy Nurbs 04:19, 16 March 2009 (UTC))

People, I actually have a life

Hey there, thanks for your support, I'm trying to do the best I can. It is a bit hard for me to take screenshots because none of my two computers have the print screen key working... 'nyways, I'd like to ask some questions. 1] Can I create a Command & Conquer: Sole Survivor page? I see there is none... I know it has no plot and stuff, but still it would be useful in my opinion. Also, tell me if there's anything else I can do other than screenshots. I was also planning about taking a better screenshot of the GLA Scorpion Tank [Yes, I think that screen sucks :P]. Greetings. Also, I hope I didn't post in the wrong place. (User:CKeen 19:40, 15 April 2009 (UTC))

Well, as I've seen there are pages in this wiki [like this one ] that are not treated as if they were real, and describe the product. So maybe I could make a similar page for sole survivor, without mentioning the non-existant storyline. But anyways, I'll make sure to ask Grizzly first. Thanks for your help and excuse me for my terrible english (User:CKeen 19:55, 15 April 2009 (UTC))

Don't worry it's okay, I'll do it later because I have Red Alert 3 and Uprising installed on my laptop and not on the main pc. As for now, I took pics of all the tech buildings of red alert 2, which were missing. I'll also try to edit those pages a bit... "The damage is too extensive!" :P

There you go, I managed to add new pics for the Psionic Decimator and the Vacuum Imploder. Also added a new screenshot for the futuretech page.

Hey, have you downloaded Uprising yet? I did, it's a pretty cool expansion and the new skirmish maps are seriously good. However I think some units unbalance the game, and those units are the Harbringer and the Gigafortress. The Harbringer literally won the allied campaign for me... Other than that it is very good, but it doesn't have online play. (Well I guess that's why it costs 19,99 €). CKeen

Soviet Tez 10:58, 4 May 2009 (UTC)Hey for generals i deleted the Russian section since it's a mod and not part of the game, please correct me if i edit wron, beacuse i quite new.

We have improved on our units template so its time to replace the old templates with the new upgraded ones as in go to pages like Crusader Tank and add the new improved Unit Template.(Saffy Nurbs 03:59, 12 May 2009 (UTC))

Why not the most fun ones on top of this screen?!?

Please do not use talk pages to make personal commentary. They are there to discus ways to improve the content of articles, not as mini-general discussion forums. - Meco (talk) 09:46, 8 June 2009 (UTC)

Of course, it's a great idea! If possible, try following this layout, adding subsections (such as Notes for various trivia on the mission or Characters appearing) as you see fit. http://images1.wiki.nocookie.net/fallout/images/0/08/Personal_Sig_Image.gif Tagaziel (call!) 15:36, April 9, 2010 (UTC)

Absolutely wonderful work. I jus checked one thing - you could try using the Renegade editing tool to help you with the transcripts - the string editor there has absolutely every string in the game presented as text (even those normally not printed as subtitles or captions). http://images1.wiki.nocookie.net/fallout/images/0/08/Personal_Sig_Image.gif Tagaziel (call!) 08:35, April 14, 2010 (UTC)

Should be fairly easy to set up. Also includes a W3D viewer. You might also want to try opening the strings.dbb file with Wordpad. http://images1.wiki.nocookie.net/fallout/images/0/08/Personal_Sig_Image.gif Tagaziel (call!) 07:07, April 19, 2010 (UTC)

It's perfectly safe. Hell, it's an official Westwood release, you don't get any safer than that. :) Myself, I'll be back to editing from time to time, real life is interfering (and I want it to - I'm engaged and getting married!) http://images1.wiki.nocookie.net/fallout/images/0/08/Personal_Sig_Image.gif Tagaziel (call!) 21:52, May 31, 2010 (UTC)

Hey Helix. Well, life's been treating me pretty fair. I've got married in August (to a fantastic woman), though she's currently 650 km away, I'm still studying law and am preparing to write my master's thesis and still lose life over Wiki. Plus, we have PUPPIES now! Little beautiful welsh corgi pembrokes! http://images1.wiki.nocookie.net/fallout/images/0/08/Personal_Sig_Image.gif Tagaziel (call!) 06:55, October 13, 2010 (UTC)

Hi helix, I dunno if ur the best person for this, but ur the first one i saw on here, so I'll give it a shot. I'm trying to apply some math to the pictures of the kirov airships. Can you please email me at jonathansmth19@gmail.com to talk more about this? It's for my math course project.