The V2 rocket launcher is a mobile rocket artillery used by the Soviets during the Second World War.

Its V2 rocket is the first long-range rocket used in military conflict, though it has a much older history than the Second World War. The design has many drawbacks - the process of rearming the launcher is long and tedious and often extremely hazardous to the crew manning it. However, most Soviet commanders deem these risks necessary and use these launchers to great effect against the Allies, wreaking havoc and destruction against their bases, often with great success.

It is very lightly armoured, with its erector systems exposed and the rocket completely unshielded as well a slow reload time, making it unsuitable for direct firefights. However, when used in a combat support role, the launcher is effective at eliminating tanks and infantry and can be used to eliminate base defences from safe distances. One direct hit from a rocket can destroy a medium tank, and splash damage is significant. The rocket is so fast that it is practically impossible to be caught by AA defences of any kind (except on "curtained", or specially coated unit or structure), and the rocket is highly accurate. The rocket system clearly outranges and outperforms the Allies' counterpart. However, the reload time is extremely slow, during which the V2 rocket launcher is completely defenseless. This highlights the importance of protecting it with tanks and other front-line troops.

The nature of the rocket's flight path makes it much less effective on moving targets, so stationary targets are a good priority. Also, be careful of splash damage - V2 rocket launchers fire at anything that gets into range, and they can devastate friendly units and/or structures if they happen to be nearby. 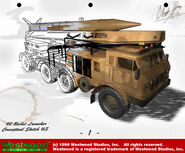 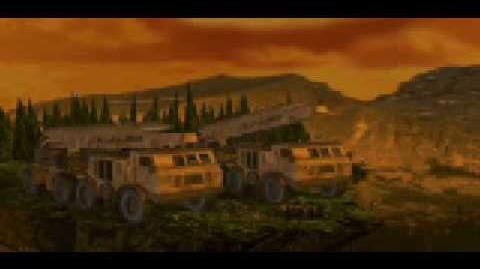 Retrieved from "https://cnc.fandom.com/wiki/V2_rocket_launcher?oldid=240739"
Community content is available under CC-BY-SA unless otherwise noted.