The V3 rocket launcher was a Soviet long-range artillery vehicle used during the first and second iterations of the Third World War. It was an improved version of the V2 rocket launcher, which was used to great effect during the previous war, and similarly, was an attack-only vehicle that fired powerful, but slow projectiles.

V3 rocket launchers are essentially heavy cargo trucks with modifications that allowed them to fire V3 missiles at distant targets. They were created to be a cheap and easily deployed missile platform that would make artillery attacks a viable option on American soil.

V3 launchers were widely used in the Soviet invasion of the United States. A number of them were deployed to besiege New York City in the beginning of the attack and were responsible for the destruction of the Statue of Liberty. They had since been seen in every Allied mission as they attempted to dislodge Allied positions, often without success.

In the non-canon Soviet campaign, V3 launchers were first deployed during Operation: Big Apple, where they assisted in reaching the Allied battle lab between the Twin Towers. It remained to be a valuable weapon in the commander's arsenal for the rest of the campaign.

Of all the main siege units, the V3 launcher has by far the longest range and damage per shot. An elite V3 can obliterate most structures in one to four shots, and mass groups of them can overwhelm all but the most overtly reinforced base defenses, especially since they are the only primary land based siege unit capable of firing upon the Grand Cannon from outside its range. V3 launchers have no problem shooting targets at different elevations (higher or lower ground).

It is unable to protect itself at close range, and can be destroyed very quickly by pretty much anything that can fire on it. Due to improvements in targeting technology (and lack of speed produced by rocket booster) by the time of the Third World War, it was possible for the rockets to be shot down mid-flight. Interestingly, the missiles moved in a ballistic trajectory, not a conventional launch-level-dive attack, which in effect lengthened the delivery time, allowing AA defenses to mow down the missiles before reaching the target. To solve this, it is wise to escort V3 rocket launchers with tanks.

There is a glitch in V3's flying mechanics. When a group of V3 launchers is shooting at a single target, it is possible that a single V3 rocket may deviate from the target, keep flying upward until it leaves the theater screen, clearing some area from its fog of war. This may have something to do with V3 missile stacking limits.

Another glitch happens when a V3 is ordered to attack any target within its range, provided that the V3 is not facing the target's direction. At the exact moment the V3 faces towards the target (the rocket is not launched yet), order the V3 to go anywhere (even to the edge of the map) and let it stop there. The V3's rocket will automatically launch and the missile will head towards the target and even leaves the theater screen. If the V3 is facing the opposite direction where the target is, the rocket will turn and still head for it.

In the alternate timeline, the V3 launcher was succeeded by the V4 rocket launcher, which combined the missile trajectory of the V3 and the V2's characteristic of enemy AA being unable to shoot down the launched missile.

Note: If Yuri's Revenge is not installed, this unit will use quotes from the Rhino heavy tank. 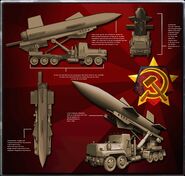 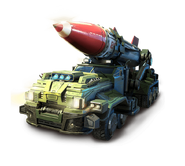 Retrieved from "https://cnc.fandom.com/wiki/V3_rocket_launcher?oldid=245855"
Community content is available under CC-BY-SA unless otherwise noted.