The V4 Rocket Launcher, also called the V4, is a powerful long range artillery used by the Soviets during the War of the Three Powers.

The moment that the Soviet Union has accidentally launched a man into outer space while experimenting with intercontinental ballistic missile technology; the nation became the de-facto world leader in rocket science. Even now, Russia and her fellow republics hold this mantle with a firm grip, and continue to develop new ways of mass-producing various types of rockets for a variety of scientific and military purposes. While not all Soviet rocket science has proven to be successful or safe over the past three decades, one Vladivostok-based firm has repeatedly delivered rocket-propelled innovation after innovation. That firm, of course, is Vodnik Rocket Arsenal, best known for its feared V4 Rocket Launcher.

The Soviet military is brimming with specialized, efficiently-designed vehicles, and the V4 Rocket Launcher is a fine example, given its pure focus as a self-powered long-range ballistic rocket platform. Although not suitable for frontline combat, the V4 can send highly destructive missles toward enemy encampments- demolishing just about anything caught in the blast. It takes mere moments for a skilled V4 operator to triangulate the coordinates to the intended target and loose one of the machine's powerful warheads. Unlike previous models, the warheads reach their top velocity quickly and minimize heat signatures such that enemy tracking systems simply cannot acquire a lock on them—at least, not in time. In effect, this means V4 rockets cannot be shot down in mid-flight, so the only sure way to avoid devastation is to prevent a launch outright. A less-optimal solution is to flee the target area. Although the Soviets are working on a tracking version of the Molot Multiwarhead Rocket, current models cannot change trajectory while in flight, nor are the rockets nimble enough to pinpoint flying targets.

While the V4 Rocket Launcher appears to be little more than a conventional truck with a mounted rocket-launching mechanism, it conceals several important features. First of all, its rockets may be specially rigged prior to launch to explode in a cluster of multiwarhead fragments at the apex of flight, widening the destructive swath of such an attack at a small expense to its concentrated firepower. Secondly, and perhaps most importantly, the V4 Rocket Launcher can replenish its own ammunition. The science behind this is a closely-guarded secret, though apparently, energy from a warhead launch is conserved within the tubing, and used to solder together the materials needed for the next launch and to "cook" the next rocket. Suffice it to say, V4 Rocket Launchers have all the firepower they need for any given battle.

It bears mentioning that the V4 Rocket Launcher lacks modern targeting computers, and consequently, the Union demands commensurately laborious certification training from V4 operators. This may be one of the reasons why V4 operators are predominantly women, as Soviet men are always needed on the front straightaway. Recognizing this trend, the Soviet Union created various incentives for women to pass certification for piloting V4s, including exonerating siblings or husbands for war crimes, or providing family stipends in exchange for confirmed enemy kills. These programs are proving quite successful.

The V4 launcher is perfect for breaching enemy defenses and destroying enemy structures from afar. They can also destroy slower-moving targets, such as heavy tanks and other artillery units, with their rockets, though more agile units could simply outrun them. The Multi-Warhead mode extends its effective area, allowing it to rain down a cluster of fragments, perfect for taking out groups of infantry.

It shares the same weakness as all other artillery units: fragile armor, lack of anti-air weapons, and vulnerability in close quarters. Therefore, it needs to be escorted by other units at all times, and must avoid frontline engagements.

The V4 rocket launcher could be based on the real-life Soviet OTR-21 Tochka (NATO reporting name is "SS-21 Scarab") a short-range tactical ballistic missile system. In service since 1976 with improvements and modernizations. Russian Federation used these missiles in the Chechen Wars and in the 2008 South Ossetia war. Also, these were confirmned to be used by Ukrainian troops in 2014 against pro-Russian rebels in Donbass. 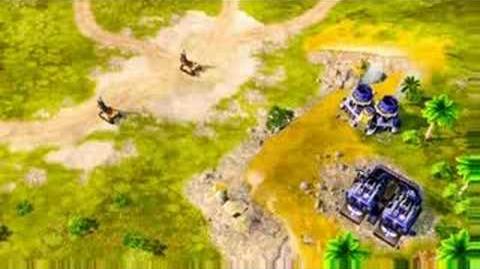 Retrieved from "https://cnc.fandom.com/wiki/V4_rocket_launcher?oldid=231008"
Community content is available under CC-BY-SA unless otherwise noted.