Venom aircraft became even more popular after the Third Tiberium War, as rebel Nod forces used them to quickly take out TCN nodes around the globe. Their small and light design makes them cheap and quick to produce, while their speed places them among the fastest aircraft on the battlefield.

The Venom carries two side-mounted missile batteries.[1]It has very light armour but is one of the fastest units in the game, easily capable of outrunning most opposition. Their main role is scouting and air superiority during the early phases of any battle involving the Support class. While rather weak alone, in large numbers they can be a force to be reckoned with. They are particularly effective against GDI Orca Mk. Vs and, in large numbers, can overwhelm even GDI's Hurricane fighters. They are also useful for harassing ground units and Tiberium gatherers.

The Venom's light armour is vulnerable to machine guns and is especially vulnerable to the Bulldog's shotgun, which can hit multiple Venoms if they group together.

An achievement can be earned if the player uses a swarm of venoms to destroy several units. 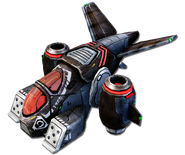 Retrieved from "https://cnc.fandom.com/wiki/Venom_(Tiberian_Twilight)?oldid=231932"
Community content is available under CC-BY-SA unless otherwise noted.