The Venom Patrol Craft was the Brotherhood's primary air fighter during the Third Tiberium War, as a successor to Harpy attack helicopters.

Like the A-15 Orca, it uses VTOL technology. Its primary tasks are recon and air interception, as it is extremely fast, but lightly armoured, and armed only with a single chaingun. The chaingun can be replaced with a laser cannon by most branches of the Brotherhood, though a slightly more powerful particle beam upgrade is available to the Marked of Kane.

The fighter possesses an extremely aerodynamic shape and two VTOL engines on articulated mounts on its sides; as such, it somewhat resembles the original ORCA Assault Craft fielded by GDI during the First Tiberium War. The pilot's cockpit is at the extreme front of the machine, allowing a large field of view, but also limiting his protection. Its chaingun/laser is ideal for attacking infantry, engaging enemy aircraft, or harassing armor - but the real role of the Venom is scouting out targets using its advanced sensors to detect and track stealthed units. It can also providing targeting data for the beam artillery units operating in the field, allowing them to bounce their beams off of mirrors the Venom carries on its underside. With multiple Venoms working in tandem, a 'beam relay' can be set up that allows beam artillery units to engage targets from far beyond their sight range, though the gunships themselves are highly vulnerable.

The Venom also features a pressurized cockpit, which relieves pilots from wearing oxygen masks during long patrols, but does have the unfortunate side effect of causing the Venom to lose pressure and explosively decompress when it takes too much damage (much to the pilots' dismay).

Another function of the Venom is deception - it can be equipped with signature generators that interfere with the opponent's radar, potentially fooling them into thinking a few Venoms are actually an entire army.

It is also worth noting that the Venom is capable of engaging airborne targets, making it useful as anti-air protection for ground forces or bases, particularly when upgraded with laser capacitors (or Supercharged Particle Beams for the Marked of Kane). Since GDI aircraft are not known for their durability the Venom's lack of major power is not a problem. Scrin aircraft, however, may be more problematic, especially the Stormrider and the fighters of the Planetary Assault Carrier. These require deft tactical handling to counter. Many Nod Commanders had chosen to attack en masse with these aircraft instead, as they were easy target practice for any unit with AA capability that isn't infantry.

Also, Venoms have extremely good fuel economy compared to most other GDI or Nod Aircraft, as well as a large amount of ammunition. Venoms can be airborne at all times during a battle, freeing up space on Nod Air Towers, to which it needs only to return for repairs.

The Venoms were used far and wide during TWIII, and their role was pivotal in taking the Hampton Roads shipyards, where they flushed out sniper teams who would have otherwise presented a serious threat to the Commando working on the ground. Several Elite Venoms were part of a team to steal GDI Nuclear warheads in the Australian Outback. A group of 4 veteran Marked of Kane Venoms upgraded with Supercharged Particle Beams also spearheaded LEGION's operation to reclaim the Tacitus in 2052.

The Venom is not seen in the service of the Black Hand, as they do not use aircraft due to their religious belief. 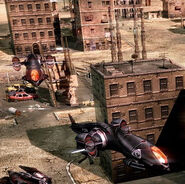 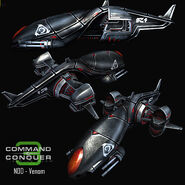 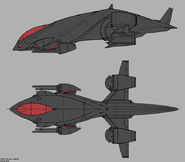 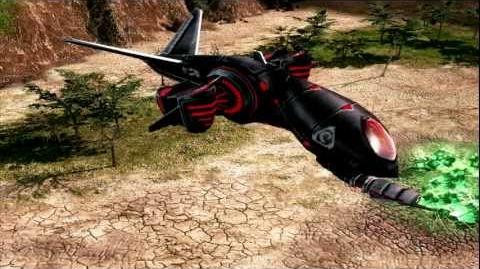 Retrieved from "https://cnc.fandom.com/wiki/Venom_(Tiberium_Wars)?oldid=237492"
Community content is available under CC-BY-SA unless otherwise noted.