The Virus was Yuri's sniper unit used during the second iteration of the Third World War.

Armed with a virus-laden sniper rifle, these indoctrinated women can take out any standard infantry unit with one shot. When killed by the virus, the victim instantly expands, decomposes and violently explodes, releasing a cloud of fast acting bio-toxin that damages everything in its wake, including light vehicles passing through the cloud. Any infantry killed by the cloud will undergo an identical process and release another cloud.

These snipers have a slow rate of fire and their dart guns are useless against vehicles and buildings. The toxin cloud is harmful to friendly units as well, although interestingly enough, the Virus is immune. Furthermore, the Virus is easily countered by any sort of vehicle or base defense, as well as British snipers, who have superior range. Given a large group of enemy units with a good concentration of infantry, a good choke point, a good vantage point, and some patience, a single Virus could easily lay waste to a large number of units in said group.

To add protection, Virus can be ordered to enter inside an IFV or Battle Fortress. This will make them more versatile and deadly. 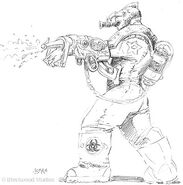 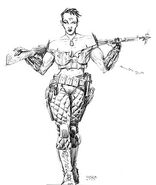 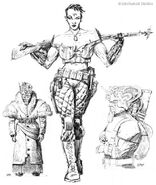 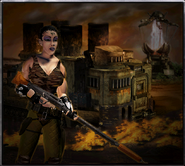 In Yuri's score screen in Yuri's Revenge version 1.000
Add an image to this gallery

Retrieved from "https://cnc.fandom.com/wiki/Virus?oldid=228405"
Community content is available under CC-BY-SA unless otherwise noted.