Visceroids are the results of uncontrolled, irregular Tiberium mutation.

Visceroids were disturbing creatures that sometimes form when organic life dies to Tiberium exposure. As flesh breaks down after death, it has the potential to mutate into a visceroid, a crude Tiberium-based lifeform. Visceroids often appeared to be blob-like masses of flesh that sometimes had a few recognizable features from those they once were left over within their structure, and were highly erratic in nature. Some types were even capable of combining their biomass to essentially make a larger visceroid. One of the first mutated creatures to appear, the visceroid was encountered as early as the First Tiberium War.

Originally roughly spherical in shape and capable of emitting only small clouds of toxic Tiberium gas, it was weak and not much of a threat. However, these unstable blobs of flesh soon evolved and became an actual threat, with the ability to expel a highly concentrated stream of toxic, Tiberium-based gas at other organic lifeforms as a defense mechanism, with the curious side effect of potentially turning their targets into visceroids themselves as a result of lethal Tiberium exposure.

Visceroids could form as a result of all sorts of Tiberium-related death in the first war; troops and civilians alike could become visceroids by dying from Tiberium radiation, by being exposed to Tiberium-based weapons, or even as a result of accidental chemical exposure to the substance, such as from processed, stored forms of Tiberium.

Something all visceroid forms had in common was a vulnerability to weapons like assault rifles, flamethrowers, or machineguns: Any specialized anti-infantry weapon that was not Tiberium based was effective at combating visceroids. Larger weapons like anti-tank rockets or cannon shells were somewhat effective, though to a lesser extent.

The Visceroids of 2030, during the Second Tiberium War, can be effectively described as a second generation of the creature. They can be defined as a collection of pre-sentient protoplasm, with lightning-quick, extremely strong pseudopods and the ability to absorb great amounts of kinetic force. Smaller entities were relatively docile (colloquially referred to as "baby" visceroids), but larger specimens were capable of destroying entire cities, or wreaking havoc even in military bases, due to their speed, ferocity, and resilience.

Second generation visceroids were most notable for their ability to combine. Two "baby" visceroids could form into an "adult" visceroid, which was essentially just a larger version of the former creature, being stronger, more durable, and more aggressive as a result. While babies would mostly run from potential enemies, and defend themselves when necessary, adults would actively and aggressively attack any potential threat near them. Even GDI's large and powerful Titan walkers were vulnerable to attack by aggressive adults.

It was not until 2047 that the Visceroids managed to reach a stable mutation stage. The final form of the visceroid has a sturdy, protective shell and three tentacles it uses to move. The Forgotten even managed to domesticate some of these creatures and by 2077 they use them as suicide bombers, with explosives strapped to their shells[1] as well as a source of food[2].

Visceroid behavior has always been very basic and non-intelligent in nature; they often attack any non-visceroid lifeform or building near them indiscriminately and seem to wander and idle randomly. Visceroids even attacked Scrin buildings, vehicles, and lifeforms, despite the fact that the Scrin themselves were Tiberium-based lifeforms.

Additionally, all Visceroid forms thrived in the presence of Tiberium. Simply being in a Tiberium field or being exposed to the substance was enough to allow them to regenerate. As a result, Visceroids were often found near Tiberium, and were always associated with it. Tiberium was required for their sustenance, and also required for them to even initially form. Second Tiberium War visceroids were so strongly associated with the substance that simply dying caused Tiberium crystals to begin to sprout from the site of their death.

The Visceroid population is directly tied to levels of Tiberium poisoning. Tiberium gas is a corrupting agent, breaking down virtually any living tissue it comes into contact with. Long term exposure cannot be treated and causes a spontaneous breakdown of the affected tissues nearly instantly, as Tiberium saturation within them reaches a certain point. Smaller Visceroids can merge to form adult forms, which are significantly more dangerous.

Unsubstantiated reports exist that some visceroids can reproduce, but most are unfortunate humans transformed by Tiberium.

The Scrin Corrupter, or rather, its Tiberium spray, was noted to create Visceroids on occasion, an unintended side effect of the BC weapon.

A Visceroid was also seen attacking an Annihilator in a Tiberium field in Cologne. 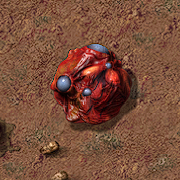 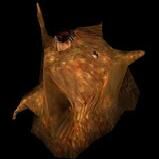 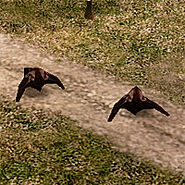 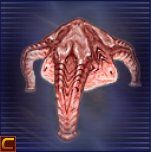 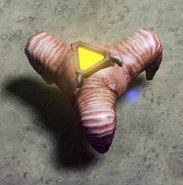 A dead visceroid being cooked for food.
Add an image to this gallery

Retrieved from "https://cnc.fandom.com/wiki/Visceroid?oldid=241141"
Community content is available under CC-BY-SA unless otherwise noted.