Did not appear in Red Alert 3

General Vladimir is an honorable soldier and a competent military commander, though his career has made him arrogant and egocentric. He is close with Premier Alexander Romanov, who often treats him as his best, most capable General, most probably due to him being quick to attribute other's victories to himself (despite his own tactical skills).

While he plays a backseat role throughout much of the Allied campaign, he is one of the key characters of the Soviet campaign. In the canonical campaign, he was in charge of the attack on Chicago and subsequent occupation. His secret orders included the construction of a psychic amplifier, to dominate the minds of American citizens. When the Allied commander destroyed the device, Vladimir stated that Chicago was of no further use to the USSR and promptly nuked the city. Vladimir was also the main commander for leading the Soviet assault on Pearl Harbor. After the war, the fate of him is unknown. Because it was him who ordered the nuclear destruction of Chicago, it can be assumed he was put on trial for war crimes, and possibly executed.

In the Soviet campaign, Vladimir was firstly in charge of naval attack on the Florida coast where a Allied naval base was located. However, his attack was not effective and the Commander had to protect him with submarines. In the briefing of Operation: Home Front, the player is praised for their service to the USSR and given a brief speech about the importance of Soviet austerity and rejection of Western decadence. Romanov then puts the player in contact with Vladimir, who in a sense of irony to the earlier schpiel, is seen partying in a Jacuzzi with a couple of bathing beauties. The line is promptly cut off by Romanov, stating Vladimir "is a war hero and needs some rest".

Later, he became the head of the American occupational force, using the White House as his residence. Succumbing to the soft, posh American lifestyle, he became even more arrogant, culminating in him openly calling Yuri a traitor, once the former was declared the Supreme Commander of the Soviet armed forces by the ailing Premier Romanov.

This action cost him dearly - Yuri declared Vladimir a non-person and ordered his capture. Holed up in the White House, the general was eventually overran by loyalist Soviet forces. When the Soviet Commander found Vladimir inside the White House, Yuri used his device to lobotomize Vladimir telepathically. 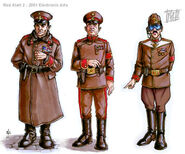 Retrieved from "https://cnc.fandom.com/wiki/Vladimir?oldid=231557"
Community content is available under CC-BY-SA unless otherwise noted.