GDI War Dogs are an evolution of a quadrupedal chassis that was built for a 1/200th scale prototype of the Mammoth Mk. II walker. Although that chassis design was unworkable at Mammoth scale, GDI scientists found it to be an excellent platform on which to build a light autonomous scout vehicle.

A great scouting unit for War factory opening, War dog squad moves fast and will not find themselves at disadvantage to neither Militants nor Cyberwheels, in numbers, they deal very well against Laser squad. Unlike all other scouting units, War Dogs, don't deal that much damage but are very resilient. This makes them a great unit to hold pads at the last moment or act like robot-shield for long-range infantry.

Their fast speed, low price, and durability makes them suitable to bait burst units to attack them instead of preferred targets. This is especially effective against Orca bomber when it is behind its own units.

Being a squad, War dogs can hold against slow-firing, large damage units like Obelisk of Light, since it can only kill one squad member per shot.

Works well with Sniper team and MG squad, where the Dogs stall the attacking ground units while the long-range units deal damage from a safe distance.

It can be countered by any anti-vehicle unit, but in the early game, it is especially vulnerable to Laser drones and Militant-Laser squad pair (both together can take down the War dogs twice as fast as Laser squad alone). 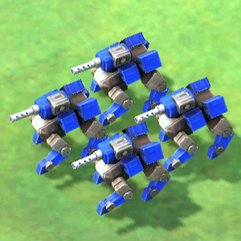 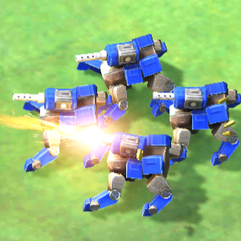 Retrieved from "https://cnc.fandom.com/wiki/War_Dogs_(Rivals)?oldid=240791"
Community content is available under CC-BY-SA unless otherwise noted.