The Warlord tank is the main battle tank of the Asia-Pacific Alliance. An improvement over its Chinese predecessor, it is armed with powerful twin cannons.

Warlord tank at Gamescom 2013, built on an ex-Bundeswehr Patton chassis 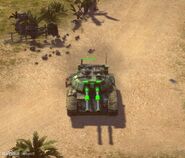 Unit Description
Add an image to this gallery

Retrieved from "https://cnc.fandom.com/wiki/Warlord_tank?oldid=225674"
Community content is available under CC-BY-SA unless otherwise noted.