They are armed with twin 20mm automatic railguns able to pierce through most infantry armor and even destroy light vehicles given enough time. The railguns rest safely on an elevated platform 30 feet above the ground. With an IR spotlight and a next generation sensor package, the watchtower is capable of detecting stealth units in addition to its role as an anti-infantry defense. In addition, its programming prioritizes enemy infantry, so that its efficiency is maximized against enemy forces consisting of both vehicles and infantry.[1]

However, the watchtower needs to aim and fire a burst at every individual member of a squad (as opposed to the shotgun-like Shredder turret or the indiscriminate razors of the Buzzer Hive) so it has limited effectiveness against large groups of enemy infantry such as Nod Militants. However, the Watchtower is able to fire over structures, making Watchtowers placed behind obstacles very difficult to remove with just infantry.

It can be upgraded with special Armour piercing ammunition, increasing lethality especially against heavily armored troops such as the Black Hand, Enlightened, and Commando.

The watchtower is a very effective defensive emplacement, able to tear through infantry in seconds. It also easily destroys lightly armoured targets, such as attack bikes. They will always target the weakest unit within their line of sight, which is generally infantry and light vehicles.

Watchtowers can also fire over buildings, so hiding them behind other structures can give them added protection.

In multiplayer, it is common to see players construct a Watchtower in the early game and sell it immediately. This grants them a Rifleman squad for an equivalent price as if they purchased them in the barracks.

According to early screenshots, the Watchtower was originally a component tower with the Vulcan cannon upgrade, indicating that early on the tower was supposed to make a return in Tiberium Wars. 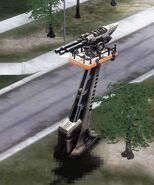 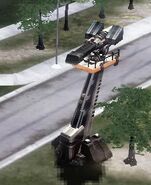 Early watchtower (component tower)
Add an image to this gallery

Retrieved from "https://cnc.fandom.com/wiki/Watchtower?oldid=237544"
Community content is available under CC-BY-SA unless otherwise noted.