The White House is the home and the office building of the Presidents of the United States of America.

Completed in 1800, the white house was subsequently burned during the war of 1812, and largely rebuilt from the ground up. During the presidencies afterwards, a number of additions and renovations have taken place.

As it was home to the American President, it was used to colloquially refer to the highest echelons of the American government. In fact when Kane, leader of the Brotherhood of Nod, hijacked control of GDI's Ion cannon during the First Tiberium War, the White House was considered as a potential target.  However at the time that Nod hacked into the Ion Cannon the US President was at Camp David and if it was destroyed it was evidently rebuilt.

It hadn’t served much else of a purpose after the the US, and other nations was subsumed into GDI. The White House became largely relegated to being a monument to the democratic, Western-style government that GDI embodied and a major tourist attention.

During the Third Tiberium War, Nod launched an assault on Washington, D.C., with Intelligence Officer Ajay advising that the White House be captured. The loss of GDI's precious "Tourist Trap", as cynical Nod forces called it, would demoralize the already reeling GDI presence in the region. In truth, many GDI soldiers were shocked to see Nod banners flying from one of their most important symbols.

During GDI's retaliation, the recapture of the White House was put off, in favor of more vitally needed strategic offenses. However, once the Pentagon, Langley AFB, and Hampton Roads Shipyard were secure, Acting Director Boyle deemed it necessary to retake the White House to drive Nod forces out of Washington. In a well planned raid with Firehawk support, a commander managed to retake the White House for GDI by using the newly introduced Predator MBT. After GDI was victorious, GDI troops removed the Nod banners on the White House, and replaced them with GDI banners, indicating that the tide has turned. 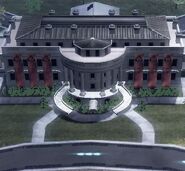 The White House after it was taken over by Nod
Add an image to this gallery
Retrieved from "https://cnc.fandom.com/wiki/White_House?oldid=207761"
Community content is available under CC-BY-SA unless otherwise noted.