Nod's Last Stand is the final operation of the GDI counteroffensive in BZ-2 that ultimately pushed Nod out of the Eastern Seaboard of the USA.

When Nod banners flew on the White House, GDI morale sagged. When the enemy offensive was stalled and the advantage regained, GDI High Command decided that the White House was to be the location of the final, most decisive battle in Washington. Such a victory would not only be important from a military point of view (since a valuable Nod weapons cache in the area held many of their most advanced weapons) but would also boost morale.

For this operation, a squadron of Firehawk attack jets was deployed from Langley Air Force Base. Once advance units would clear the way for an airstrike, they'd carpet bomb the weapons cache, paving the way towards the White House. V-35 Oxs would also fly into the area and deploy GDI forces proper.

A small GDI taskforce of four missile sqauds is inserted outside the destroyed Logistics Center where a Nod weapons cache was situated. Along the way they discovered that Nod had spread Tiberium in the city. Splitting into two teams each team destroyed the SAM Turrets blocking the airstrike. The GDI commander then gave the clearance for the Firehawks to carpet bomb Nod's weaponry.

A base is then established at the site of the destroyed Logistics Tower and Nod cloaked its base with its Disruption Towers. Nod then began making raids, with the vehicles making a direct frontal assault while the militia and the black hand soldiers attempted to flank the GDI forces. The commander had sniper teams garrison buildings at key strategic points to fend off the Nod soldiers while Guardian Cannons were deployed to deal with the Nod vehicles.

GDI Command advised that the commander destroy the Nod power plants flanking the right of the White House to decloak the enemy base. It was also advisable for the commander to destroy the Secret Shrine to prevent Nod from training Shadow Teams that could covertly sabotage GDI's base. Due to the relentless Nod raids the commander assembled a large battalion of Predator Tanks and APCs loaded with Grenadier squads in case Nod soldiers garrisoned civilian buildings to defend the auxiliary structures. Along the way GDI captured two civilian Tiberium silos to get a one-off credit boost.

Fighting their way through the streets the GDI force managed to eliminate the Secret Shrine and also the power plants. This casued the disruption towers to go offline and decloak the Nod base so Nod is truly discovered. GDI pressed on the offensive against the Nod base as infantry reinforcements arrived to assist the armoured battalion. Nod defense became futile as their key structures were destroyed. What was left of the Nod forces retreated or surrendered. The GDI Commander claimed the White House replacing the Nod banners with the colours of GDI.

The commander's recapture of the White House had inspired all GDI forces across the globe to strike back. In fact GDI even managed to invade the Yellow Zones and decimate some of Nod's own strongholds. While Acting Director Redmond Boyle believes GDI will prevail, General Jack Granger remains sceptical since interrogation with Nod POWs imply that Nod will use WMDs to strike GDI cities. Granger and Kirce James secretly sends the commander to Egypt to investigate if Nod does have such weapons. 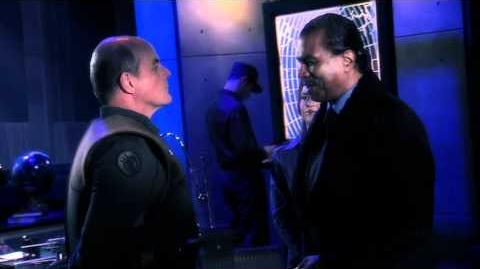