Dr Wong Hu Chan was the head scientist for GDI's orbital ion cannon project and led the development of this superweapon in a GDI research facility in Angola. Due to his importance, he was marked for assassination by Kane. Eventually, Nod soldiers managed to pinpoint his location and eliminate him. Despite the success of the mission, the superweapon he was working on was deployed successfully, albeit with delay.[1] 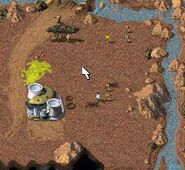 Retrieved from "https://cnc.fandom.com/wiki/Wong_Hu_Chan?oldid=226019"
Community content is available under CC-BY-SA unless otherwise noted.