The X-O Powersuit was the first bipedal walker designed by GDI. It is commonly considered the grandfather of walkers used in the Second Tiberium War.

The suit was roughly 1.5 times the size of a human (10') and had two articulated arms with weapons and mechanical hands attached to them. The main body stood on two armoured legs and was shaped roughly like an egg with a large, armoured glass cover on the top, where the pilot was located. It weighed at about 2000 lbs.

The suit's main purpose was covert operations requiring quick and effective strikes with full anti-armor potential. To this end, the walker had a high powered 20 MW laser, an 8mm minigun, and a 35mm rocket launcher equipped. The two legs gave it great speed and allowed it to track down enemies quickly. It also carried video and IR imaging equipment in armoured components on its back.

The suit could also be equipped with a jetpack for airborne deployment and attacks. It is often referred to as the predecessor of the Wolverine. 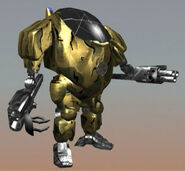 Ditto, deploying jetpack units
Add an image to this gallery
Retrieved from "https://cnc.fandom.com/wiki/X-O_Powersuit?oldid=229087"
Community content is available under CC-BY-SA unless otherwise noted.