Xiao "Taskmaster" Ri is an APA general that appeared in the canncelled Command & Conquer (Generals 2). He was the basic general for the APA faction.

Xiao Ri is the foremost General in the armies of the Asia-Pacific Alliance. He is an experienced military leader who rose to prominence during the First GLA War, leading the occupation and pacification of a GLA-blighted Europe. In peacetime, Xiao became a key figure in the formation of the Asia-Pacific Alliance, suppressing dissent, driving rebels from APA lands and keeping peace at any cost. His actions allowed the initially fragile coalition to solidify into a global superpower it is today. 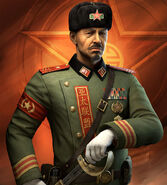 Retrieved from "https://cnc.fandom.com/wiki/Xiao_Ri?oldid=230117"
Community content is available under CC-BY-SA unless otherwise noted.