Psychic blast does not cause own casualties

Yuri himself appears in game as Yuri Prime. He fills the role as the commando for his unique faction, similar to Tanya for the Allies or Boris for the Soviet Union in Yuri's Revenge.

Yuri Prime is a significantly more powerful version of the Yuri clone in that he can mind control enemy units and most structures. These exclude garrisonable buildings, tech buildings, superweapons, and faction-specific economy-supporting buildings (ore purifier, Industrial Plant, cloning vat). He can control an empty tank bunker or the tank inside it, but not both simultaneously.

He can also cross water thanks to his floating platform. His version of the psychic blast has a longer range, faster recharge time, and it can damage vehicles. This helps him deal with attack dogs, terror drones, war miners, and other threats more quickly and safely.

Like Yuri clones, Yuri Prime also can auto-detect and mind-control a disguised spy, with the sole exception if the spy disguises himself as a Yuri Prime.

Only one Yuri Prime may be trained from the barracks, although two can be produced if a cloning vat is built. 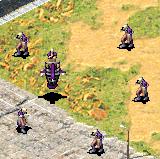 Retrieved from "https://cnc.fandom.com/wiki/Yuri_Prime_(Yuri%27s_Revenge)?oldid=224881"
Community content is available under CC-BY-SA unless otherwise noted.