A modified variant of the Orca Mk. III, the ZOCOM Orcas are outfitted with Sonic grenade launchers instead of rocket pods.

Since they mostly operate in areas with heavy Tiberium contamination, ZOCOM forces make heavy use of sonic weapons to aid their abatement efforts. One such example is the ZOCOM Orca, a modified Orca Mk. III that fires sonic grenades, which cause powerful area-of-effect damage.

Since operations in the hostile environment of Red zones often require more durability than sheer firepower, ZOCOM Orcas cannot be upgraded with Hardpoints, but can be equipped with Ceramic Armor to increase their survivability.

Unlike the standard rockets used by the Orca, sonic grenades move fast and have a wide area of effect. They are much better at destroying infantry squads and massed vehicles, but also cost 400 credits more than a regular Orca. They do less damage to heavy vehicles than a standard Orca, but are still effective strike platforms against any ground unit.

Just like regular Orcas, they are completely defenseless against enemy aircraft or SAM missiles. Other units need to protect them in some situations. 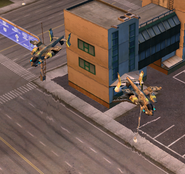 In a city
Add an image to this gallery
Retrieved from "https://cnc.fandom.com/wiki/ZOCOM_Orca?oldid=237605"
Community content is available under CC-BY-SA unless otherwise noted.