Zhana is a Soviet Commander with preference towards air units, having worked in the Soviet Air Force and the Soviet Intelligence. She is a true Soviet loyalist, who boasts about having the most loyal units in the Motherland. Stalingrad is her hometown.

Zhana was conscripted into the Soviet air force at a young age and immediately distinguished herself as a brilliant pilot, leader and devoted patriot. Eventually reaching the rank of commander, many pilots across the union seek transfer under her command.[1]

It is said that each of her pilots can single-handedly take down ten enemy planes. A strict and skilled commander, she will execute any subordinate who fails to meet her standards. She is therefore feared but at the same time greatly respected by her troops.

Zhana personifies the Soviet airforce. In fact, her picture appears on propaganda posters all over the Union. It is said that after she came into command of the Air Force many more young men have joined than ever before.

The beautiful and elegant Zhana has a casual tone to treat adversaries with a minimum of respect. Although charming her methods are lethal for her opponents.

Role in the war

She is the rival of Commander Giles, an Allied Air Force General.

In the Allied campaign she, like other Soviet commanders at one time, worked together with the Allies to stop the Imperial menace by destroying the Floating Fortress in the North Sea (Operation The Unfathomable Fortress). Surprisingly, Zhana devoted herself entirely to the achievement of the military objectives. She treated the Allied commander with respect, unlike other Soviet Generals.

In the Soviet campaign, Zhana helped the commander to retake the city of Vladivostok from the Empire of the Rising Sun and destroy Tatsu's palace there during operation Taking back Ice-Harbor. She then assisted in the capture of an Allied lab on Mykonos. When the Union needed her to lay a trap for Field Marshal Robert Bingham, she and the Soviet General established an elaborate ambush to deplete the Allies troops. Bingham and his surviving officers were forced to capitulate. She survived Premier Anatoly Cherdenko's betrayal on Easter Island and helped the commander to destroy the Premier's volcano fortress (Operation The Stone-Faced Witnesses).

In the Imperial Campaign, she was assigned to the defense of Stalingrad from an Imperial assault in Operation To Conquer Shattered Spirits, which ended in Soviet defeat.

Zhana was not seen during The Uprising. Her whereabouts during the conflict were never disclosed. It would appear, though, that Vera Belova took her place.

She sends waves of Twinblades and MiGs as well as Kirov airships to punish her enemies. 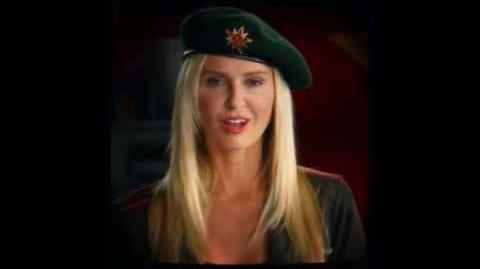 Retrieved from "https://cnc.fandom.com/wiki/Zhana_Agonskaya?oldid=235892"
Community content is available under CC-BY-SA unless otherwise noted.