The APA Espionage General, Blackjack, makes excellent use of stealth to soften targets before bringing a powerful front line to finish enemies off. Whether using Fireflies and Saboteurs to sneak into enemy bases and wreak havoc or using Shadow Tanks to take out high priority targets, Blackjack is a force to be reckoned with.

Equal part spy and soldier, Zhu Guozhi has lived in the shadows for more than a decade. He speaks little of his past. His childhood spent on the heavily industrialized outskirts of Shenzhen, was remarkable only in how unremarkable it had been. Destined for a long military career from an early age, Guozhi graduated with top honors from the APA military academy before being recruited by Chinese Military Intelligence and trained in the arts of battlefield espionage and misdirection. Quickly he became the scourge of the GLA, infamous for using misdirection - notably using false intelligence and satellite holo-armies to lure GLA forces into deadly ambushes, turning the tactics of the enemy against them. This is an impressive feat considering that the GLA themselves are masters in guerilla warfare. Zhu's years fighting a shadow war have left him mistrustful of strangers. He is careful not to reveal too much lest he fall victim to the tactics he has shown such mastery of. 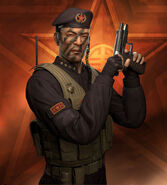 Wallpaper
Add an image to this gallery
Retrieved from "https://cnc.fandom.com/wiki/Zhu_Guozhi?oldid=227573"
Community content is available under CC-BY-SA unless otherwise noted.