Zone Armour is a type of infantry armor developed by GDI to replace their aging combat suits.

Zone Armor is a powered exoskeleton, and as such is much more powerful than normal body armor. The armour is fully sealed, allowing infantry to operate in heavily contaminated environments, such as the Tiberium-infested Red Zones. Though Zone Armor is bulkier and heavier than standard armor, the fact that it is powered and equipped with systems to enhance the wearer's strength, agility and reflexes make it possible for the wearer to function more effectively in combat than a normal person could, provide a higher degree of protection through the use of heavier but stronger materials and allow the wearer to wield heavy weapons and withstand the recoil generated by them. A soldier equipped with Zone Armor would be as powerful as some vehicles in combat. The suit is strictly used only for its allotted usage and weapon assigned. The suits, though greatly enhancing performance, were not designed to do things outside its design parameters (such as performing  Martial Arts, swimming, climbing, etc.).

Armors come in different variants, from the utility-minded rig of the Engineer to elite, heavily armored Commando suits. On the Third Tiberium war, there was only single type, the Zone Trooper armour. Events leading to the Fourth Tiberium War (such as the failure to contain Tiberium spread) pushed the development for usage on other fields (including weaponry) as well. It is designed so that a normal human can readily "wear" it without modifications such as cybernetics (such as Nod) and thus, can swap the outfit easily. However, certain training is required  to allow the use of specific models (such as the Zone Captain)

The origin of GDI's line of Zone Armor can be traced back to near the end of the First Tiberium War, where Ignatio Mobius's Assault suit was used for protection against Tiberium and in combat. Following the war, GDI researched into this technology, resulting in the development of the X-O Powersuit.

By the Second Tiberium War, the Wolverine, a development of the X-O Powersuit, had become a standard feature in GDI armies. However, it has been argued that the Wolverine is actually a walker rather than a powered suit.

Powered armor was researched into following the Second Tiberium War when GDI was looking for something that would allow infantry to operate in the inhospitable Red Zones. By the time of the Third Tiberium War, GDI had developed a powered armor suit that could be deployed on the frontline, which resulted in the Zone Troopers and Zone Raiders. However, the technology was highly expensive and prototypical.

By 2064, GDI took powered armor to the next level by developing the cheap and affordable Zone Armor line of powered combat suits to increase the survivability of frontline infantry. Shortly, it becomes standard issue for GDI infantry. Nod Separatists responded by deploying a new and improved Flame Tank.

By the time of the Ascension Conflict, Zone Armor is used by all frontline GDI infantry. 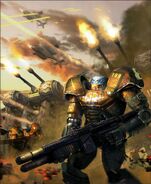 A very badly conceived early model. Not only did leave the most vulnerable part of the body exposed but it had large white arrows highlighting that shortcoming to Nod snipers.

Early Zone Troopers, about to discover that a plastic helmet and a pair of visors are insufficient to protect against Tiberium contamination. 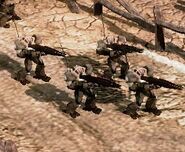 Zone Troopers, notice the canopy that they finally added 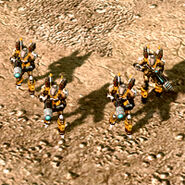 A GDI Zone Enforcer during the Fourth Tiberium War.

Overview of the family of armours
Add an image to this gallery
Retrieved from "https://cnc.fandom.com/wiki/Zone_Armour?oldid=227127"
Community content is available under CC-BY-SA unless otherwise noted.