The Zone Defender is the heir to the GDI Missile Squad, specializing against aircraft with dual rocket launchers and using a variant of Zone Armor.

Unfortunately, GDI has yet to release any information beyond what has been acquired by commanders in the field about the Zone Defenders. It is currently unknown given the considerable presence of the Defenders within GDI ranks. All that is deduced is that they were spun as a cross between the Zone Trooper (or Zone Raiders) and GDI's history of missile-wielding infantry, such as the Missile Squad. Otherwise, there is no indication of the history or these GDI infantry.

The Zone Defender uses it's dual rocket launchers to take down enemy aircraft, but is not very effective against heavier armor, such as Crawlers. Upgrades allow for cliff jumping. Due to being in armor considered light by modern standards, they are highly vulnerable to gun-based damage, such as Devout or rogue GDI Zone Enforcers. GDI is known to deploy a considerible number of these rocket-launcher wielding women in most of it's battles, due to the versatility of rockets they are useful against almost all units, with structures being the main difficulty for them.

An achievement can be earned if the player uses it to shoot down several units with it. 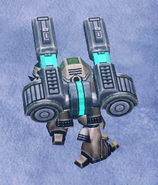 Zone Defender with Assault Packs Upgrades
Add an image to this gallery
Retrieved from "https://cnc.fandom.com/wiki/Zone_Defender?oldid=231893"
Community content is available under CC-BY-SA unless otherwise noted.