Zone Enforcer is a variant of the Zone Trooper available to Defense Class of GDI in Tiberian Twilight. It can be thought of as the successor to the Rifleman squad.

Wearing heavy suits of Zone Armour and carrying automatic triple-barreled chainguns belt-fed from a back-mounted ammunition case, the Enforcers are the first line of defense against lightly armoured threats and infantry. Their suit has an overhead lamp mounted.

The Zone Enforcer can target both air and ground with a heavy machine gun, which it fires continuously before reloading. They are also equiped with anti-structure grenades that they use before begining a chaingun firing sequence. They are effective anti-light units, and can target aircraft such as the Venom or infantry such as the Ascended. Due to all Zone Armor being considered 'light', they are vulnerable to gun-based damage, such as their own machine guns. 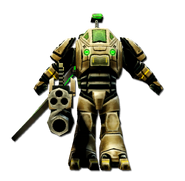 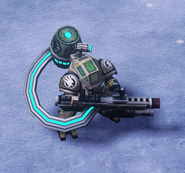 A groups of Zone Enforcers firing it's weapon followed by an anti-structure grenades
Add an image to this gallery
Retrieved from "https://cnc.fandom.com/wiki/Zone_Enforcer?oldid=230976"
Community content is available under CC-BY-SA unless otherwise noted.