Zone Trooper was a GDI infantry unit during the Ascension Conflict.

Although in the Third Tiberium War the Zone Trooper was the pinnacle of GDI Infantry, their role has diminished over the last few years due to advances in Zone Armor technology. The Zone Trooper is now the mainline infantryman of the Global Defense Initiative, equipped with a cannon-based weapon.

Zone Troopers use Cannon damage, effective against medium armor such as the Nod Avenger or the Centurion. However, due to wielding a cannon weapon, it cannot target aircraft such as the Venom or the Cobra. Troopers can sprint for a short period of time. Upgrades allow cliff jumping and an abilities to use Jump Jets. Having light armor they must stick with the zone enforcers.

An achievement will be aquired if the zone trooper destroyed several units using its weapon. 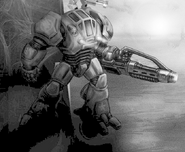 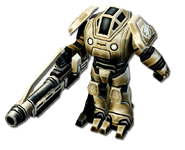 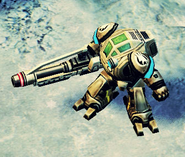 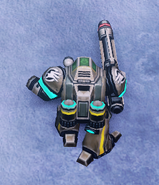 A Jump Jets thrusters on the upgraded Zone Trooper

Zone Trooper using it's Jump Jets
Add an image to this gallery
Retrieved from "https://cnc.fandom.com/wiki/Zone_Trooper_(Tiberian_Twilight)?oldid=231013"
Community content is available under CC-BY-SA unless otherwise noted.