Zone Troopers are advanced heavy infantry used by the GDI since the Third Tiberium War.

They wear advanced, self-sufficient powered suits made from the same composite used in the Mammoth 27's armour.[1] The advanced life support systems allow the wearer to survive in heavily Tiberium contaminated areas such as the Red zones. In addition to being able to survive in such conditions, zone troopers are equipped with jump jets, allowing them to move long distances in seconds, often dropping into the heat of a battle as reinforcements. For combat the zone troopers carry an advanced portable railgun based off the same design employed in the new Mammoth 27 and MBT-6 Predator tanks. Besides protection from light weapons fire, the armour also absorbs the recoil the railguns produce and increases the wearer's strength and power. Some zone troopers do one handed push-ups while in their power armour when idle, and they can run faster than regular riflemen.

Squads of four zone troopers are deadly foes, often accompanying larger tanks on their way into combat. Their suits can be upgraded with sensor packs giving them limited stealth detection abilities and with advanced power packs which amplify the suit's performance, resulting in increased resilience and firepower, and allows the suit to self repair and also give the wearer medical attention.

Zone troopers can also be dropped from orbit using atmospheric entry drop pods, allowing for rapid insertion onto the battlefield as either reinforcements or to establish beachheads. The drop pod squad is composed of 3 experienced squads of troopers. Unlike the Bloodhounds, GDI Airborne and sharpshooter teams which have to be inserted via Ox transports, making reinforcement slow and vulnerable, Zone troopers arrive on the battlefield instantenously.

However, the cost of equipping a single Zone Trooper is enormous as a single suit and associated equipment costs 25 credits more than a whole Rifleman squad. They are also completely defenseless against aircraft (especially the Venom) and armour-piercing projectiles of the shredder turret, and flame-based weaponry is highly effective against them. It is advised to cover them from such threats using anti-air units and heavier tanks.

A heavily modified variation of the zone trooper armour is deployed by ZOCOM, and utilized by soldiers known as zone raiders.

Some zone troopers modify their armour, customizing its appearance with decals and different colour schemes.

Following the conflict and in the years leading up to the Incursion War, GDI had managed to make improved versions of Zone Armor which for a time led to the units being somewhat immune to the effects of the fires from Nod flame tanks until a new series of such vehicles were introduced. The zone trooper also has a new type of variant known as the Zone Captain, as well as other variations such as the Zone Enforcer or Zone Lancer.

The initial zone trooper design did not have sealed armour. The fanbase complained this did not make sense given the Tiberium-contaminated environment they were supposed to operate in. The final design was sealed.

A zone trooper preparing to jump 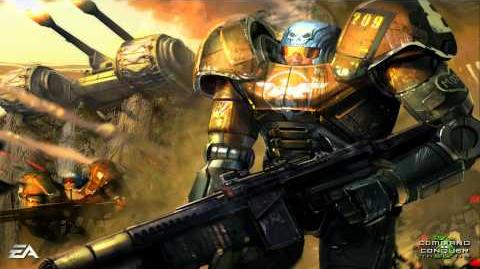 •A trooper does a one armed push-up, similar to the commando.

•A trooper will sit down and beat his chest with one arm.

•A trooper will kneel.

Retrieved from "https://cnc.fandom.com/wiki/Zone_Trooper_(Tiberium_Wars)?oldid=237486"
Community content is available under CC-BY-SA unless otherwise noted.