It is a GDI equivalent to Nod's Cyborgs

Zone troopers is a heavy hitting infantry squad that are effective against both aircraft and vehicles, and have the highest damage per second stats in the whole GDI arsenal, at least when the squad has both members.

The only weakness being mid to high tier infantry, like Flame Trooper  and Confessor. They can also be countered by a swarm of Cyberwheels or Militants, but in the late game the the population cap is at premium and fielding two or three units against one might be impractical.

The self-healing ability means that one Zone troopers should only be attacked if at least one member of the squad will get taken down.

To help counter infantry units, ZTs can be paired up with Sniper team or Wolverine.

When Moving to Attack Favorably

When Moving to Attack Neutral

When Moving to Attack Unfavorably

When Unable to Attack Target 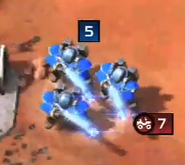 Zone Troopers in game
Add an image to this gallery

Https://youtu.be/wFZd-KXo7cs
Add an image to this gallery

Retrieved from "https://cnc.fandom.com/wiki/Zone_trooper_(Rivals)?oldid=236863"
Community content is available under CC-BY-SA unless otherwise noted.